Give a book on Spindrift a spin.

A Journey into Prayer is in three formats: soft cover, hard cover, and on Kindle.
This best-selling book by Bill Sweet is available at these links: Xlibris.com & Amazon.com
A Journey Into Prayeris reviewed by Michael E. Tymn, in The Journal of Religion & Psychical Research, October 2004, Vol. 27, Issue 4, page 229.
Read nine customer reviews here on Amazon.com 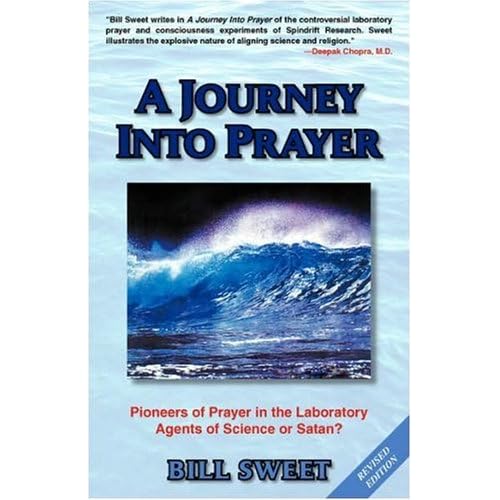 Mount Prospect, IL - Prayer is an unrelenting mental input into our world. Billons pray about other people. Religious terrorists pray about "you” everyday. Do terrorists pray to heal or hurt you? Do we pray for what we need or what we want? Do we pray to win the lottery so no one else wins? Do we pray for a better economy for our own benefit? Is there a secret in prayer? In the unprecedented book, A Journey Into Prayer, author Bill Sweet records the persecutions and triumphs of two spiritual healers who were harassed when they started Spindrift Research that developed scientific laboratory tests to measure the good and bad motivations and effects of prayer on modest experiments of prayer.

In A Journey Into Prayer, Sweet explores the adventures of Bruce and John Klingbeil as they investigated scientific ways to test prayer and human consciousness to separate the effects of holy thought from random effects. The Spindrift founders also studied the negative effects of prayer. The Spindrift research translated some spiritual experiences and religious language into the scientific language and experiments of our times. The fact that Spindrift tested prayer ignited religious dynamite. The ensuing outrage was sparked when the Klingbeils had people's thoughts and prayers tested on plants and on random numbers that formed into patterns.

The book also delves into a conspiracy of the mind that undercuts human beings from understanding their spiritual and psychic experiences.

Radio host Art Bell said, "The Klingbeils were involved in very controversial work.... They might have opened a door they did not intend to open.” Deepak Chopra notes, "Sweet illustrates the explosive nature of aligning science and religion.”

Dubbed as "deep, enlightening, and disturbing,” "filled with dynamic discoveries,” and "the clearest explanation of the scientific basis of prayer” among others, A Journey Into Prayer is an original story of innovation and spirituality never told before. Sweet says, "The book might surprise readers that some prayers apparently have a scientific basis. Readers will find a way to analyze their true motives and agendas in prayer, also who is best suited or not to hold a religious office, and how other people's prayers for us might potentially affect us for good or ill. The positive and negative motives that ignite the direction of a prayer suggest that prayers can be either a blessing or a scourge for the Earth.”

Asked about praying for the chaotic world that is foisted on our five physical senses, Sweet said, "We don't pray to the Matrix. We pray to wake up and view from above the Matrix. A line from the Matrix is 'As long as the Matrix exists, people will never be free.'"

Bill Sweet has always been interested in how prayer and religion relate to consciousness and science. A natural connection between like-thinking people resulted in his involvement in the research of consciousness and prayer at Spindrift. Bill became a president of Spindrift, Inc. Brought up on the North Shore of Chicago, Bill graduated from New Trier High School and Illinois State University with a major in communications. He founded and was president of an entertainment booking agency in Chicagoland. Sweet's avocations include being an investor, an audiophile, and an extra class ham radio operator.